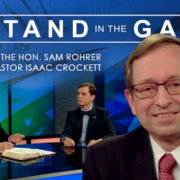 Let Us Not Allow Any Old ‘Truth’ to Reject the Unwavering Facts of the ...

American Pastors Network Calling for a National Day of Prayer for the Elections...
Scroll to top