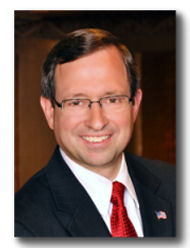 After a week of revival meetings at his church, seven year old Sam Rohrer recognized his need for a Savior. With his dad’s guidance, he put his faith in Christ that night.  Motivated by his mother to choose Biblical heroes, Sam was drawn to Joseph and Daniel.  Perhaps his admiration for those two men caused him to wonder if he might someday preach or enter the political field.  After majoring in Business and graduating from Bob Jones University in 1977, he worked in the business world for fifteen years.

In 1992, God redirected Sam’s steps into state government.  For the next eighteen years, he served as a State Representative in Harrisburg.  Being an elected official also opened up possibilities for him to share his testimony and to preach in many churches across the state.

Representative Rohrer distinguished himself in the area of economic policies while serving as a Member on the Appropriations Committee and as Chairman of the House Finance Committee.  He sought to apply Biblical principles in all areas of legislation including finance as he wrote alternative state budgets and encouraged both parties to lower costs and to avoid tax increases.  He also served on the House Education Committee for sixteen years where he fought for parental rights and against Federal entanglement in educational policies. Representative Rohrer authored the Education Improvement Tax Credit scholarship (EITC), which has already aided over 250,000 Pennsylvania students to attend private or Christian schools. The EITC Law has been noted as the model school choice law in the nation.  During his tenure, Representative Rohrer was frequently referred to as the ‘Conscience of the House’ because of his consistent stance for moral truth in public policy.

In 2009, Sam followed God’s promptings to campaign as a candidate for governor of Pennsylvania, and in 2011, as a candidate for the United States Senate.  Although he gave up his position in the House of Representatives to conduct those campaigns, God used the statewide travels to deepen his relationship with many pastors across the state.

As a minister of God in government, Sam developed empathy for the similar challenges faced by pastors in the pulpit.  In June of 2012, Sam was chosen to lead the Pennsylvania Pastors Network. Uniting his experience in public policy and his love for pastors, he encourages pastors to boldly preach Biblical Truth, especially on issues affecting our current society.  In July of 2013, the inception of the American Pastors Network has enabled the creation of new state chapters and a nationwide voice for Truth into the public square. Sam now serves as President of both Pennsylvania and American Pastors Networks.

Sam and Ruth Ann have been married for 36 years and are parents of six children and grandparents of eight.  They have homeschooled their children for 23 years and are active members of their local church.