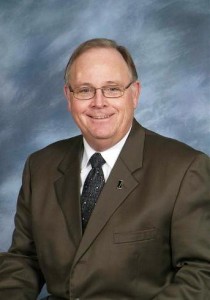 Gary G. Dull was born into a fine Christian family in Western PA in 1952 and therefore always had a strong biblical influence.  At the age of 12 in 1964, while attending a church camp, Gary received Jesus Christ as his personal Lord and Savior.  The very next day after being saved he was asked to preach his first sermon at the camp and has virtually been preaching ever since.  During his teen years he was a youth preacher for Youth for Christ and traveled with the YFC gospel team on a weekly basis.  In January, 1968, Gary surrendered to the call of ministry.

Gary has always been interested in missions.  For ten years he served as the President of the Gospel Furthering Fellowship and in 1989 founded and continues to serve as the President of the Way of Truth Ministries which has missionaries in Africa, Asia and North America.  In addition, WOTM produces radio programs aired on nearly 75 stations, conducts truck stop ministries, Bible Institutes, medical centers and a military ministry.  Gary has been privileged to travel to 25 foreign nations to preach the Gospel.

Over the years Gary has served on the boards of two Bible Colleges, two mission boards and is currently on the executive council of the National Clergy Council and the Faith and Action ministry in Washington, DC.

As Pastor of The Faith Baptist Church of Altoona and the President of the Way of Truth Ministries, Gary produces weekly television programs and daily radio programs.

Gary married his wife Nancy in 1974 and has three boys who are serving the Lord with their families.  Currently Gary and Nancy have 11 grandchildren.

Gary‘s goal in life is to put forth the effort to reach the world for Christ through preaching the Gospel and making an impact for Christ in society. In achieving that goal Gary has had the honor of being on radio daily since 1975, has preached revival services, evangelistic meetings and mission conferences.  Since 1996  Gary has been honored to have a ministry to those in government which has opened doors of opportunity for him to build relationships with elected officials  from the local to federal level.

Gary always encourages people to “Stand up for Faith and Freedom, Keep Looking Up, for the best is yet to come.”